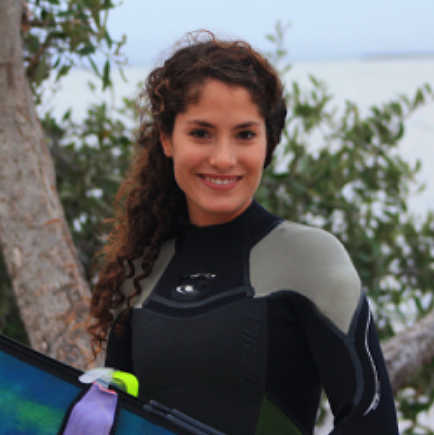 The behavioural response of prey to predator presence can elicit anti-predator behaviours, which have the capacity to affect energy intake of prey and cause cascading-effects to lower trophic levels of ecosystems. These non-lethal interactions have been widely studied in terrestrial ecosystems, but only recently gained attention in the marine realm. Observing these interactions, particularly in marine ecosystems, has proven challenging. However, advances in technology like the use of underwater cameras has allowed scientists to remotely document predator-prey interactions. Flight initiation distance (FID; distance prey allow an oncoming threat to approach before fleeing), - is a common metric used to quantifiably measure anti-predator behaviour caused by predator threat. However, marine studies have only measured FID as a response to diver-threat and the magnitude of this response in the presence of natural predators (e.g. sharks) is unknown. In this study we intend to quantify the behavioural impact of predators to mesopredatory fish using remote underwater stereo-video systems (RUVS). Using a life-size shape-model of a blacktip reef-shark, Carcharhinus melanopterus, a diver, and three non-threatening shape-controls (turtle shape-model, PVC-pipe and perspex), we will measure FID in response to these models to quantify anti-predatory behavior of mesopredatory fish in shallow reefs surrounding Lizard Island, Great Barrier Reef. This study will be the first to compare anti-predatory behavior between a natural (reef-shark shape-model) and anthropogenic (diver) predator. We hypothesize similar antipredatory response in mesopredators to both anthropogenic and natural threats. Expecting a significantly lower response to the non-threatening shape-controls in comparison to the diver and shark-model.

Originally from Mexico, I showed great curiosity for all life in general since my early years but had a particular fascination for the ocean. I confirmed I wanted to dedicate my life to learn about the ocean’s inhabitants after spending six months onboard a tall ship. I graduated from marine biology in La Paz, Mexico in 2016 and had the opportunity to study and work doing shark research around Baja. I arrived in Perth in 2019 to start my Masters degree where I look forward to carry on learning about the unique marine ecosystems that surround Australia’s coastline.